At Mallhar sea View Cottages, you will feel like its a home away from home – but with a Natures twist.

A heavenly place to simply relax and enjoy peace and tranquillity along with your loved ones. Set yourself free from the hustle and bustle of the city life for once and come down here to enjoy solitude.No other family cottages in Anjarle,Dapoli will pamper you as we do. We have a very dedicated, professional staff at Mallhar sea View Cottages to make you feel comfortable and satisfy your needs, as you enjoy your holiday. Well-furnished and clean rooms, modern amenities, great ambience, good food along with authentic Konkani hospitality... All these and more, to create happy memories to be cherished for lifetime! In fact, we are quite popular for being the best when it comes to family friendly cottages in Dapoli,Anjarle. We understand privacy and fun is part of family & ouples; for them we have special, customised services. On the other hand if you are worried about Anjarle cottages tariff then be assured that we are quite budget friendly. Our quality services and hospitality will prove to be a great value for money.

Book by May 2020. The offer is related to all summer reservations.
To get the discount mention call for detail offer.

Anjarle is a village in the Dapoli taluka of Ratnagiri district in the Maharashtra state of India. It is a small port located near the mouth of Jog river, about 4 miles south of Aade and 2 miles north of Suvarnadurga. The nearest railway station is Khed, 110 miles to the south-east.

Photographer can capture beautiful images of birds, nature and forest in anjarle. Anjarle is famous spot for bikers and trekkers. Apart from the nearby Ganapati temple which is known as Kadyavarcha Ganpati, Anjarle is known for its unspoiled beach. Tourism facilities are limited.

Anjarle is located about 24 km from Dapoli. It has an average elevation of 10 metres (36 feet). As part of the Western Ghats, the forests are evergreen, consisting mainly of tropical forest. Alphonso mangoes and coconuts are grown commercially in this area.

Anjarle is known for the Kadyawarcha Ganpati temple (Marathi: Ganapati on a cliff). This temple was originally constructed using wooden pillars ca. 1150. It was renovated between 1768 and 1780. Until the recent construction of bridge across the Anjarle creek and the building of a road up to the temple, pilgrims had to cross Anjarle creek (Jog River) in a boat, before climbing the hill using steps which pass through Anjarle village.

The idol at this temple differs from most other representations of the elephant-headed god, in that its trunk curves right, rather than the usual left. This is known as a Ujwya Sondecha Ganpati (Marathi: right-trunked Ganpati). The idol is also said to be a jagrut daiwat (Marathi: live deity), who responds to the pleas of its supplicants (nawsala pavnara Ganpati). The temple has a stone staircase on the right to reach the top of the temple (the Kalas), which has a commanding view of the surrounding coconut and betel nut trees, the nearby Suvarnadurg Fort, the Arabian sea and surrounding hills. There is a pond in front of the temple where visitors can feed large fish and turtles. Beside the temple to Ganesh is a small temple to Lord Shiva. 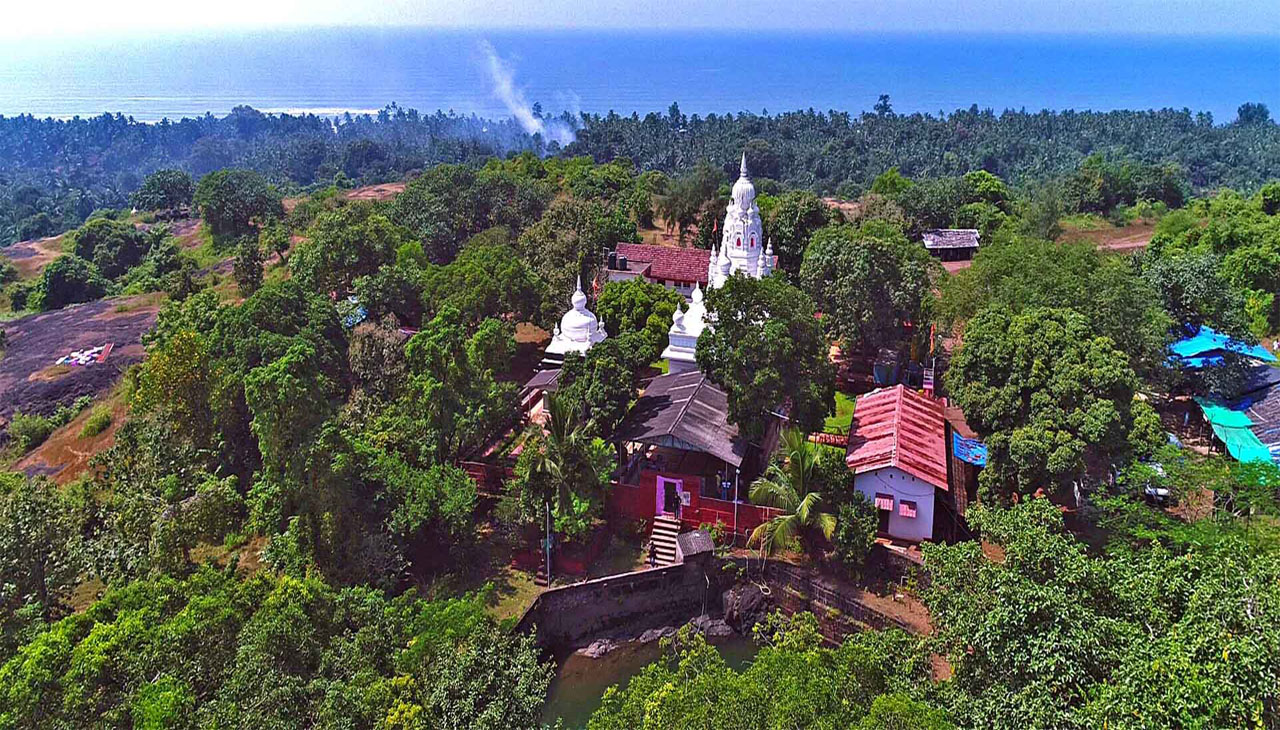 What To See Near Anjarle